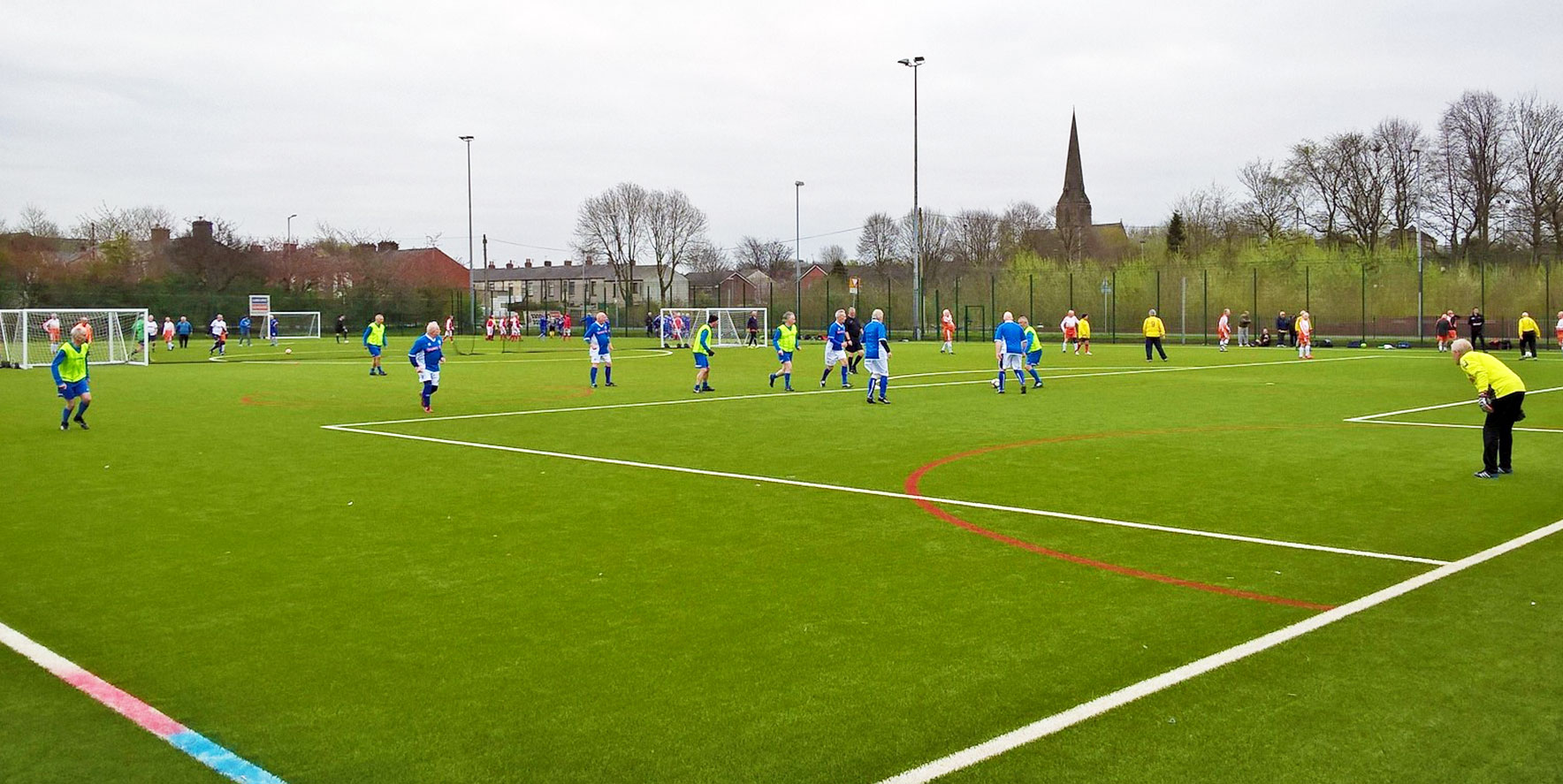 A sport is only successful thanks to the efforts of those who give up their time to organise events and inspire people to play in them.

You’ll almost certainly have heard that walking football is the UK’s fastest growing sport, but have you ever considered the people who work hard to maintain its popularity and momentum?

We spoke with founder of the Greater Manchester Over 60s Walking Football League, Bill Murney, to understand how he grew the league from nothing to 15 teams and three divisions – in just nine months!

Many thanks to Bill for taking the time to speak with us.

1. How long have you been involved in walking football and what originally motivated you to play?

I started playing walking football in September 2014 at a local session run by a well being company.

During a visit to the doctors while suffering from depression after losing my wife, I noticed a leaflet on the surgery notice board advertising this session.

After being heavily involved in football in my younger days I thought this sounded an ideal way to get some exercise and become involved again in the game I love.

2. How has the game evolved/developed since you first starting playing?

When I started there were not many teams who entered competitions, most of the guys just played for fun and the social benefits.

A few of the guys I played with, all good players who had played to a decent standard in their youth, decided that we needed to form a team to enter the many tournaments that were springing up.

How we got to our present position is another story, with some acrimony from the original session provider but we went ahead with backing from our local National League club and have never looked back.

Now of course there are many leagues, tournament and festivals for the walking footballer and that has to be a step in the right direction.

Of course, there have been a few problems with the games development, but hopefully we will eventually have a set of rules that everyone agrees on.

3. When did you found the Greater Manchester Overs 60s WFL and what were your reasons for doing so?

My original idea was to start a local mini-league with perhaps four or six teams, but it soon became apparent that interest from further afield was going to make this become much bigger than I ever imagined.

I emailed a few contacts I had made through walking football and the first to respond was Paul Gardner of the Rochdale Link4Life organisation. Paul had run tournaments previously and was very enthusiastic about forming an over 60s league.

We got together and with the help of Andrew Whitaker, the Lancashire FA Football Development Officer, the league was sanctioned and became affiliated to the Lancashire FA. Paul’s colleague, Barry Woodburn, also joined us and deals with team registration on match days.

With the increase in walking football teams and increasing opportunities for competition, it became obvious that age categorisation was needed in leagues and tournaments.

Over 50s walking football is more akin to vets five-a-side football, with running and physical contact rampant. A mixture of guys in their early 50s – and others 70 plus – isn’t a level playing field and is a recipe for serious injuries.

I thought a mid-week league for over 60s had definite potential and we now have teams from other counties travelling to join us.

4. Can you briefly describe the format of the league, how games are structured and what makes it unique?

Currently the league has three divisions of five teams, with other teams on the waiting list wanting to join.

If new divisions were formed it would mean starting another day of events, so at the moment we have put that on hold. The games are 15 minutes duration, with each team having an hour’s football.

What makes it unique I suppose is four factors: brand new 3G pitches, a great venue with changing, shower and refreshment facilities and plenty of parking space.

We also have an excellent band of referees who clamp down on running and any physical contact, plus of course the organisational side of it all.

5. How do you promote the league to new entrants and entice new teams to enter?

To be honest the only promotional activities we employ are listing the opportunity on sites such as yours plus our league website.

I think word of mouth recommendations are beginning to see new teams enquiring about joining, which of course is an ideal marketing tool.

Of course, the many positive comments on our website from current members is also a great aid.

6. Why do you think it’s important to have a separate league and competition for over 60s? And, how does this benefit older players?

As mentioned previously, 50 year-olds playing 70 year-olds is not ideal. All of our member teams love the way the game is played at over 60s level.

Of course, the will to win still survives, but it is not the win-at-all-costs attitude employed by the younger lads.

There is a massive difference in how the game is played at over 60s level, the sportsmanship and camaraderie are more evident and that it is appreciated by the majority of players in this age category.

7. What are your views on the competitive nature of walking football, and particularly, the level of contact that should/should not be permitted?

I am all for competition. Anyone who plays sport has a competitive nature as they should have, but as we get older it has to be reigned in a little bit to suit the participants’ age and their physical well being.

We play a non contact game – which I agree is virtually impossible in walking football and difficult to enforce – but we are getting the message across thanks to our excellent referees, who it has been commented on, are the best that most players have encountered.

8. In light of the above, do you enforce a particular set of rules (WFA/WFU/FA) or adopt a more customised approach?

We have our own rules which are virtually the WFU/WFA rules, with a few slight amendments. We feel the FA rules are more suitable for the younger players and in effect are just five-a-side rules without the running.

9. What are your plans for the future of the Greater Manchester Over 60s Walking Football League?

Well that’s a good question, and with the growth that we have already experienced in nine months, who knows what it will lead to.

We will not start another day’s league action until we have another five teams on the waiting list to form a fourth division.

I hope I am still around to see an over 80s division, and with the growth of the sport and as present participants get older, it will probably happen.

10. What is the best way for a new team to get involved in the league or to find out more information?